Many years ago, I was contacted through the previous version of this website by a relative of Joe Asquini. The lady in question was looking for more information about Joe's playing days. I tried to help and was ultimately given a gift that exceeded my contributions to the cause.

Since acquiring much better access to old newspapers articles, I've occasionally attempted to get in touch with this lady again to find out if she'd achieved her goal or if there was anything more she was looking for. So far, no luck.

I was reminded of all this again last night when an article about Mr. Asquini caught my eye. It's taken some time to find it simply because it is from mid-December of 1944. By then most of the football-related activity is over so searches don't extend that late into the year.

Mr. Asquini was honoured as a high school player at Ottawa Tech prior to joining the Ottawa Rough Riders. The articles about that award are copied below and if his relative is still looking for material, hopefully she stumbles across this post one day and this is something new to add to the collection. 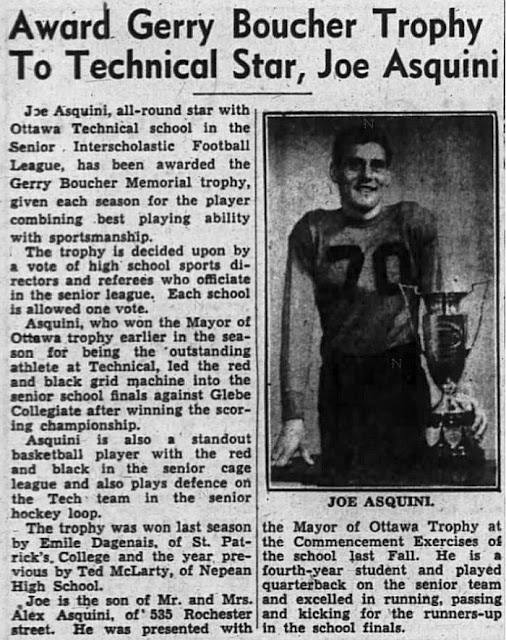 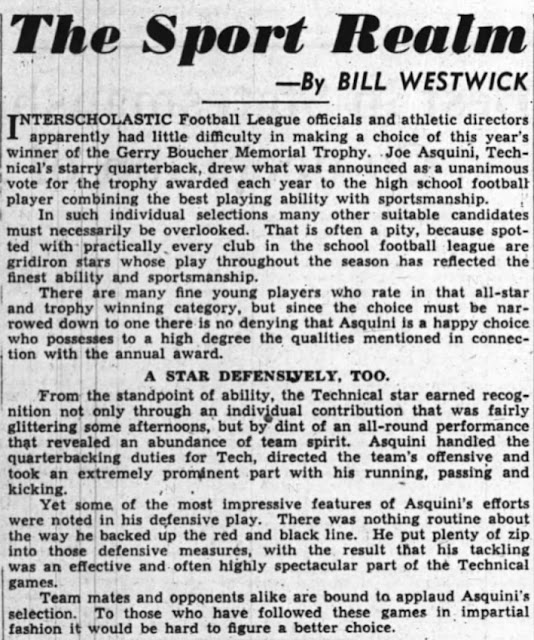 Posted by CCRider at 7:58 AM No comments:

Carleton University named its 2022 Athletics Hall of Fame class on May 12th and it included record-setting Ravens receiver Scott Alexander.

The following information was compiled by Ravens Sports Information.

In an era when football was primarily a running game, wide receiver Scott Alexander began his career with the Ravens in 1969 and set the bar for all other Carleton receivers to be compared. Over four seasons, Alexander rewrote the Carleton record book establishing records that still stand nearly 50 years later.

Alexander graduated as the school’s all-time scoring leader with 134 points, a record that still holds today. He also established Carleton records with ten touchdown catches and 62 points in a single season, as well as touchdowns in a career with 22. His single-season record of 10 touchdown catches and 62 points scored still stands today. Alexander’s 22 touchdowns in a career has been tied twice but remains unbroken. Alexander’s 89-yard touchdown in the 1972 Panda Game remains the longest passing play and touchdown in Panda Game history for either school.

That 89-yard touchdown pass in the 1972 Panda Game actually set the career touchdown record. The clip below is from the October 23rd Ottawa Journal. 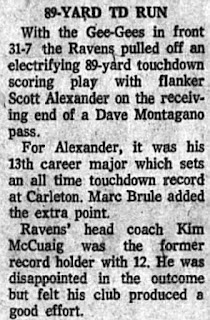 So relatively speaking, he ended up shattering the old mark when he reached 22. That the record has not been broken since speaks for itself.
Posted by CCRider at 4:47 PM No comments:

Today is the Canadian Junior Football League's National Signing Day. In their own words "the day in which players can finally sign with a CJFL club. When a player signs he is essentially signing for his entire junior football career as the player then becomes the property of that team."

I hope the Sooners take advantage of this event to market themselves a little bit as they continue their rebuild after two seasons away from the field.  As we wait for results, here's a recently-added game summary from 1994 that I came across while looking up information about that year's Rough Riders squad. Enjoy. 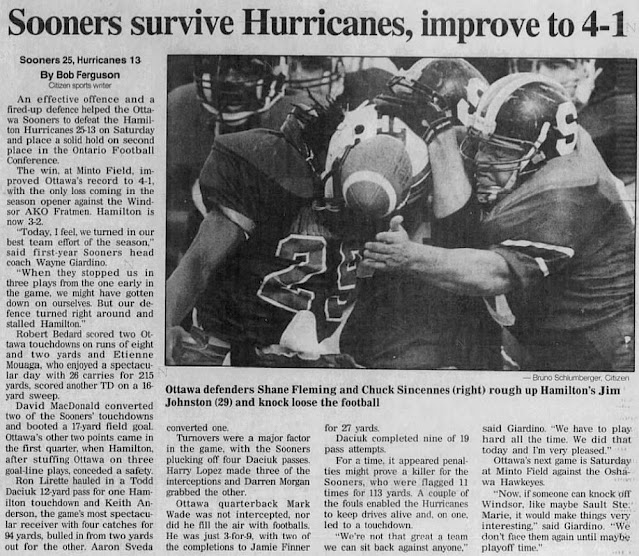 Posted by CCRider at 6:04 AM No comments: 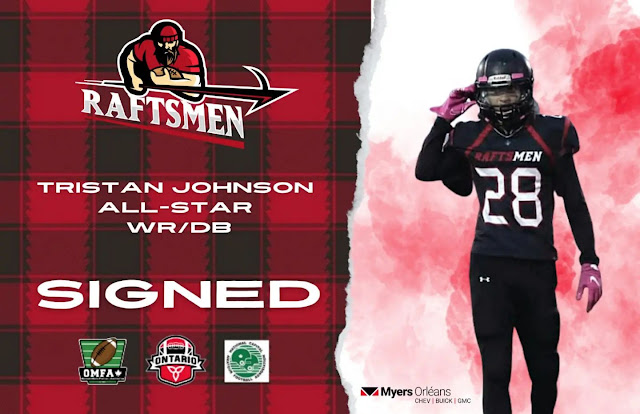 Since Tristan began playing at Tyke, he has won Team MVPs at every level and helped his team win various championships. Tristan will soon be U.S. bound, so come watch him now leading the Raftsmen in ’22!

Posted by CCRider at 4:35 AM No comments: 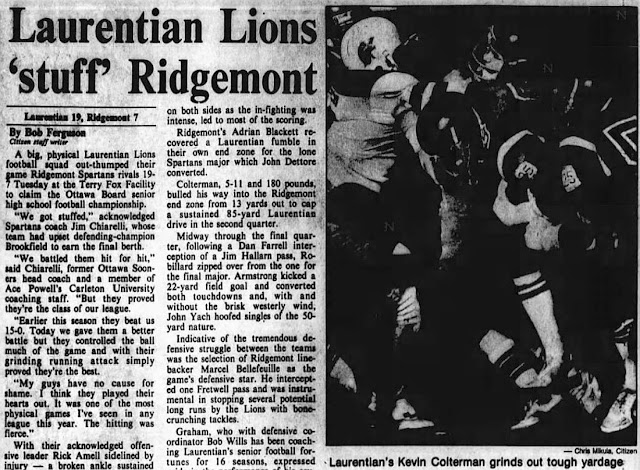 Posted by CCRider at 3:45 PM No comments:

The high school football page continues to grow as the eventual champions' regular season scores are added when found, as are all playoff results. 1982 is getting the attention this evening.

Many game summaries are quite brief, little more than a sentence or two, but the Carleton board championship warranted a bit more attention and detail. Here it is below. 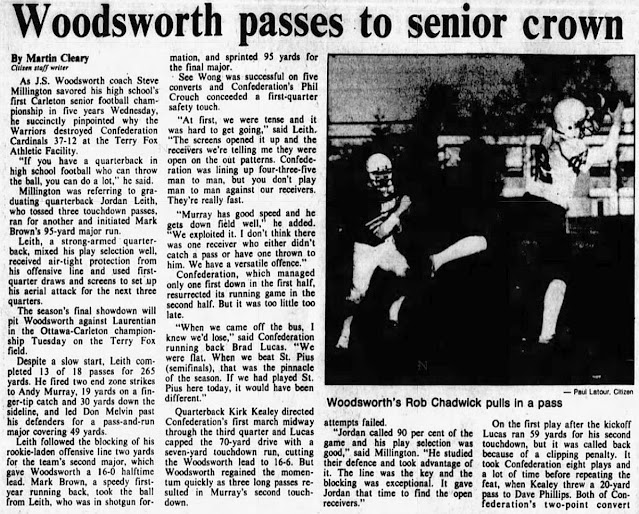 Posted by CCRider at 2:45 PM No comments:

Obviously inspired by Eddie Brown being named the head coach of the Orleans Raftsmen Midget team earlier this week, I dug up the article below. It's from shortly after Brown joined the Ottawa Renegades training camp for that team's first season and provides a rundown of his colourful career. 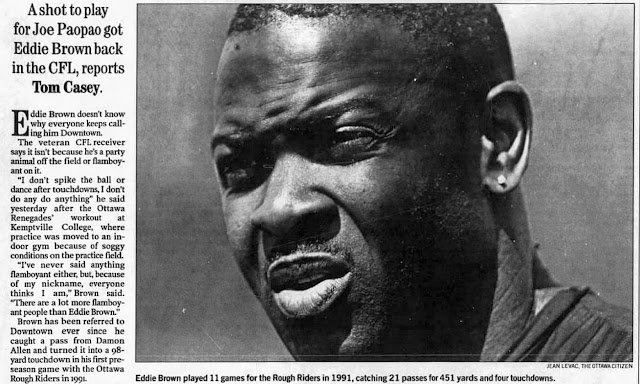 He contributed 25 receptions for the Renegades in 2002 for 316 yards and a score before being released in early September.
Posted by CCRider at 5:22 AM No comments: 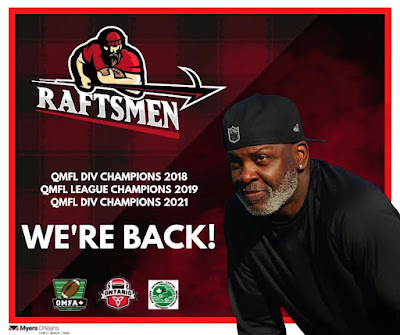 From a Cyclone (Iowa State, NCAA) that brought “Downtown” to two Grey Cup winners, that then rolled into coaching the Carleton Ravens to now rolling logs down the Ottawa River as a Raftsmen.

The OMFA is proud to welcome Downtown Eddie Brown as our new Midget Head Coach competing in the NCAFA Midget League.

Coach Eddie is assembling one of the finest coaching staffs that will help ensure our players have fun, compete at the highest level and reach their fullest potential.

Posted by CCRider at 2:46 PM No comments: 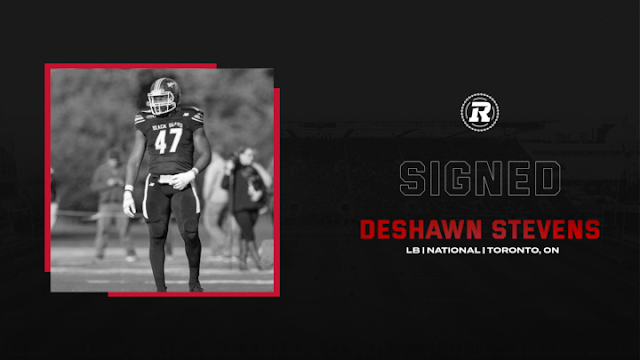 OTTAWA - The Ottawa REDBLACKS have inked their first-round draft choice from 2021, signing linebacker Deshawn Stevens to a CFL contract, the team announced today.

Stevens, 24, was selected sixth overall by the REDBLACKS in the 2021 CFL Draft. The Toronto native was coming off of a season with Maine that saw him rack up 36 tackles, including 13 unassisted, in a shortened four-game season.

Stevens transferred to West Virginia for the 2021 season, and recorded 12 tackles through 10 games.

Posted by CCRider at 9:13 AM No comments:

This post will be updated frequently as information is made available. 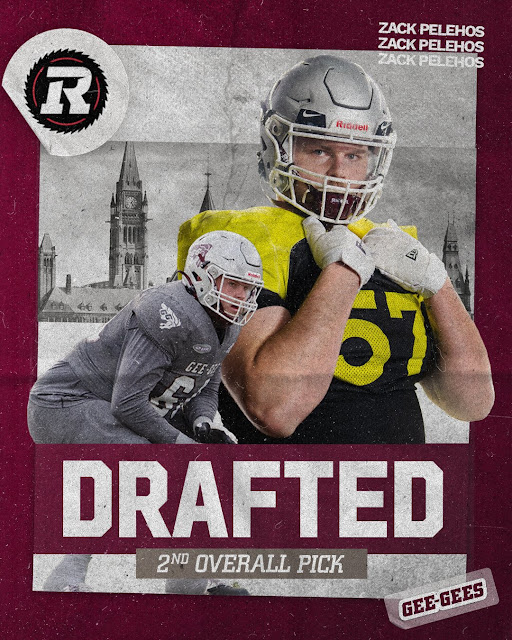 Graphic from Gee-Gees Football Twitter account
cfl.ca: "The six-foot-six, 296-pound lineman was a 2021 OUA first-team selection...Pelehos played in all 370 of the GeeGees offensive plays in 2021 and was named the team’s MVP. He made his way to the CFL Draft via the Ontario Regional Combine.

As a freshman in 2018, Pelehos was an OUA second-team all-star, a member of the OUA all-rookie team and the team’s o-lineman of the year."

Redblacks GM Shawn Burke: “Zack’s progression was evident through the combine, and what he brought to his program. He’s nasty, he’s going to be physical, and he brings the type of football we want to play.” 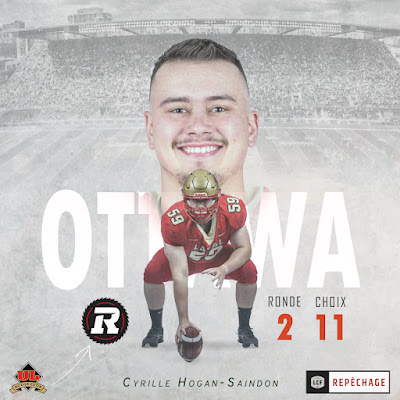 Graphic from Laval Football Twitter account
Redblacks GM Shawn Burke (to the Ottawa Sun): “Talking about our DNA, our physicality, there’s a big arrow up on (Hogan-Saindon). He’s a one-year starter. A lot of guys that come out of Laval and Montreal are a bit older because of the CGEP program, but he’s a little younger in age. He’ll take some time to develop, but he’s got huge upside. He’s extremely intelligent, an academic all-Canadian. He’ll come in and bring an edge to that position. To get him with that pick, we’re extremely excited.” 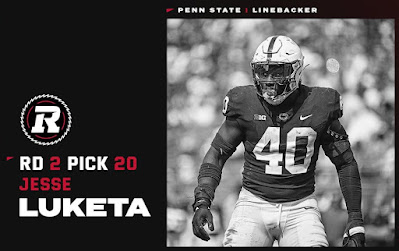 Redblacks GM Shawn Burke (to the Ottawa Sun): “You look at it and when you can get a player of that calibre with what you would maybe call an additional pick – we hope not to have that pick anymore in the future – but let’s take advantage of it. We looked at a couple other local kids. I think it’s important to acknowledge what Jesse’s doing for this community and football and to have him associated with the Redblacks brand and give hope and inspiration to our football community means a lot. I called Jesse right after and congratulated him. I said, ‘There aren’t too many guys that can say they were drafted twice in one week.’ He was jacked to be drafted by his hometown team. We talked about, ‘Hey, we don’t expect you here. We want you to make it as far as you can. But we want you to be an ambassador for not only the City of Ottawa, but our country and the sport we all love.’ ” 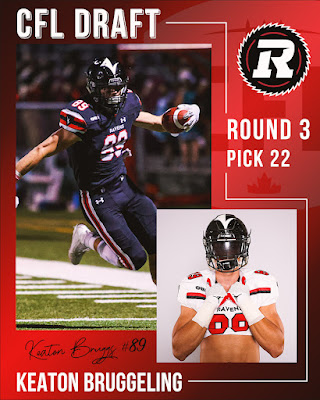 Graphic from the Carleton Football Twitter account
Redblacks GM Shawn Burke (to the Ottawa Sun): “You look at him and he’s 6-foot 3, 220 pounds. He’s got the body for this. You see the speed on the field when you watch his film. It’s still coming together for him. He took a big jump this season where he became more of your go-to guy. He’s still got some teaching to come along. Coach LaPolice and (receivers) coach (Alex) Suber, they’ll get him there. He’s guy who’s passionate about football. And he’s excited to get in our building as well.”

Redblacks GM Shawn Burke (to the Ottawa Sun): “He started at Northern Illinois, and then made his way down (to Tuskegee) with his (twin) brother (Wesly). He’s something different. You don’t see 6-foot-4, 6-foot-5 225-pound guys, that type of size. You’re always looking for size and athleticism. And he brings it. It’s something we don’t have in that group right now. He’s not going to be here this year, he’s going back to school. But he seems genuinely excited for the opportunity and we’ll track him for the year.”

Redblacks GM Shawn Burke (to the Ottawa Sun): “He’s definitely a special teams guy, but he has some potential which I don’t think he’s reached yet. (University of) Calgary went through a bit of a difficult season; usually they’ve been a powerhouse and they fell back a little. It’ll be exciting to see how he reacts to the pro camp and what he learns from that. But in terms of athleticism, he’s a body type we’re looking for. We thought we were a little lacking in that.”

Redblacks GM Shawn Burke (to the Ottawa Sun): “Connor is a fullback but he’s also got some long-snapping skills. When we looked at our roster, we obviously have L.P. (Louis-Philippe Bourassa) who is great at what he does, but Maxime (Latour) got picked up by Toronto late last year and we thought we were a little light there. He’ll likely get a chance to go back to school. (Special teams co-ordinator) Jim Daley’s (at St. FX) and he’s a great special teams coach.”

Redblacks GM Shawn Burke (to the Ottawa Sun): “When we looked at special teams rankings, he just kept rising. He plays big — 210, 5-foot 11, and comes from a winning program. We do have two great special teamers as Canadians at running back – Gilly (Brendan Gillanders) and Jackson Bennett. Over the course of a season, you’re always going to have some ups and downs injury-wise and I believe (Perrier) gives us a chance that if he was sitting there available and ready to play, we wouldn’t see a huge fall off.”

Earlier in the day, Ottawa selected the following players in the global draft.

Zepada, 24, hails from Ensenada, Baja California, and was the only Mexican of the 13 international prospects to be selected into the 2022 NFL International Player Pathway program. The 6’4 290lbs offensive lineman spent his college career with Tecnólogico de Monterrey. 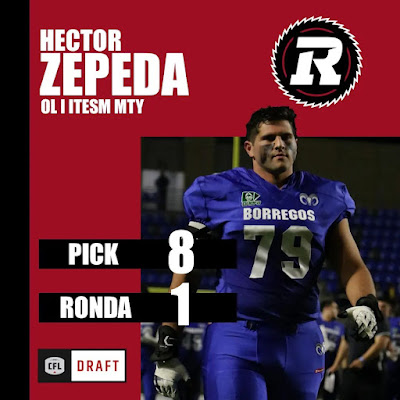 Jean-Alphonse, 25, is a product of the Laval Rouge et Or. Born in Bobigny, France, the defensive back impressed at the CFL Global Combine, where he recorded the fastest 40-yard dash time (4.55), fastest short shuttle time (4.18), and placed fifth in the broad jump (9’ 11/12”).

Ballinas, 23, played his college football at Albany State, where he earned All-Conference First Team kicker/punter honours, and was also named HBCU All American, as well as HBCU Special Teams Player of the Year. Ballinas is a native of Guadalupe, Mexico.

The Redblacks did well in this draft last year with the selection of linebacker Tyron Vrede from the Netherlands. He was third on the team with 10 special teams tackles and added another five defensively.

Posted by CCRider at 5:21 PM No comments: 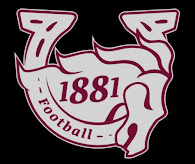 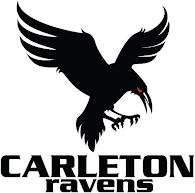 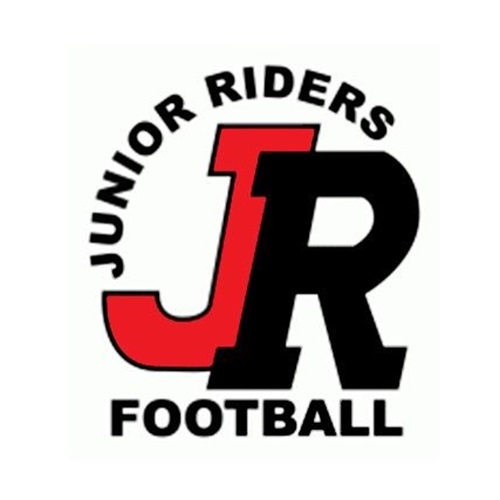 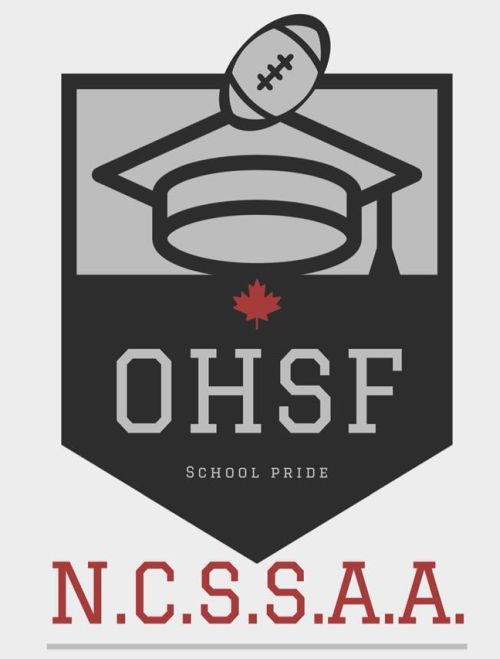 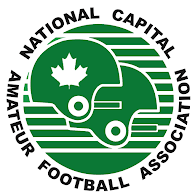 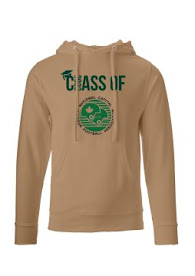 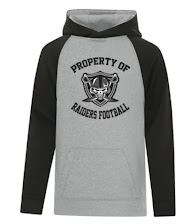 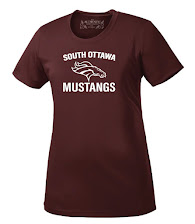 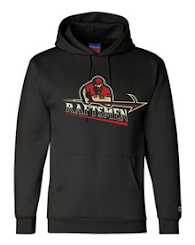 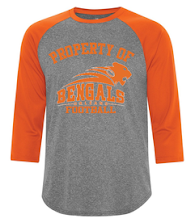 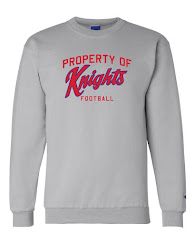 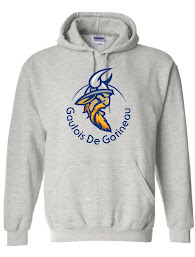 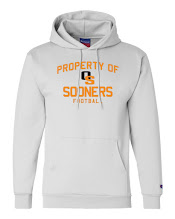 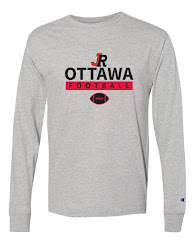